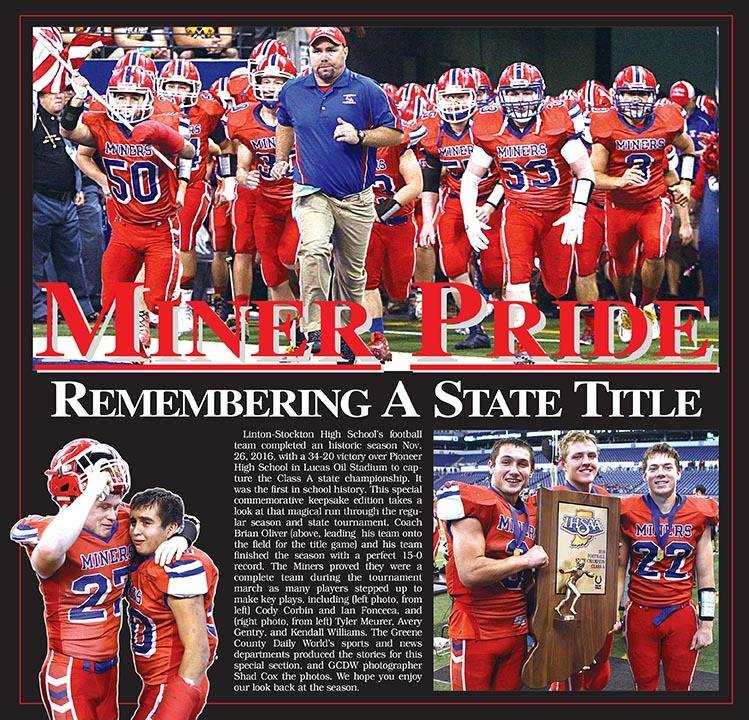 It’s a date Linton-Stockton High School football fans will never forget. It’s the day the Miners captured the program’s first state championship with a 34-20 victory over Pioneer in Lucas Oil Stadium at Indianapolis.

It seemed like time stood still the final couple of minutes of the Class A title game as Pioneer put up a last-ditch effort to put more points on the board. The clock stopped more than Coach Brian Oliver wanted I’m sure.

But the last couple of minutes — which seemed like 20 — gave Linton fans the opportunity to savor what was about to happen.

The Miners, one of the top programs in the state, had never won a state title. But on this day, it happened.

And for players, the coaching staff and fans, Linton will never be looked at the same again. When football fans around the state now speak about Linton, they will include the words: State champion.

The Greene County Daily World has been there for every game along the way, from Speedway to Lucas Oil Stadium. All 15. It was an enjoyable ride. There were lightning delays, lots of rain, and some cold temperatures. And lots (and lots) of blowouts by the Miners.

To highlight Linton’s accomplishment, the newspaper will produce a keepsake edition to commemorate the Class A state title. The GCDW’s staff has been working on stories for the special edition since the title game ended.

It will be inserted into Friday’s newspaper, and you can pick up additional copies at the newspaper for 75 cents each.

• The “Thursday night feeds” have been a Linton football tradition for years. Jill Williams, mother of senior player Kendall Williams, has helped organize the events the past four years.

“As a parent, it’s hard to describe the satisfaction of feeding this team,” said Williams. “I just love to see them eat.”

• The Linton coaching staff spends many hours away from home during the season, and offseason, preparing for games. How do their families handle their loved ones being away so much?

“He’s not only their coach. Even when the kids are graduated, they still come to him for advice. That’s special because it’s about more than football,” Lindsey Oliver, wife of the head coach, stressed.

“It’s been fun watching Brian be successful. This has always been something he has wanted to do. Four years ago we sat down as a family and discussed what this was going to entail. It wasn’t just going to be him as the coach. It’s a lot more than that. It’s not just a game on Friday night.”

• Linton’s tradition — known as Miner Pride — was built over time. The newspaper’s staff spoke to several former Linton coaches about Miner Pride and what that really means.

“Brian (Oliver) grew up in Linton and played here. His family’s here. He’s here forever,” former head coach and current athletic director Charlie Karazsia explained. “We have that consistency and the kids know that going in. They see the same coaching staff in place. That’s important.”

Former coach Steve Weber also alluded to the consistency within the coaching staff.

“The program is very consistent as far as X’s and O’s. The coaches have been there forever and they’re very consistent in what they do,” Oliver said. “When you’re a sophomore and you’re getting the same thing over and over again by the time you’re a senior it’s second nature to you.”

• The newspaper’s staff thought it was important to interview the seniors on this year’s team. What did this season mean and what will they remember about the past four years?

“I have learned that your coaches push you to the limit for a reason,” Owen Sparks said. “They may make you cry. They may make you want to quit. But no matter what the cost, they are there when you need them. They just want the best out of you.”

These are just a few of the stories you’ll find in the keepsake edition.

Area businesses and individuals have purchased ads to help make this edition possible. We hope you will patronize the businesses, and when you’re there please tell them thanks for the sponsorship.

The newspaper has spent a lot of hours on the special section, and we hope you enjoy reminiscing about this year’s state championship team.

Chris is publisher of the Greene County Daily World. He can be reached by email at cpruett79@gmail.com .