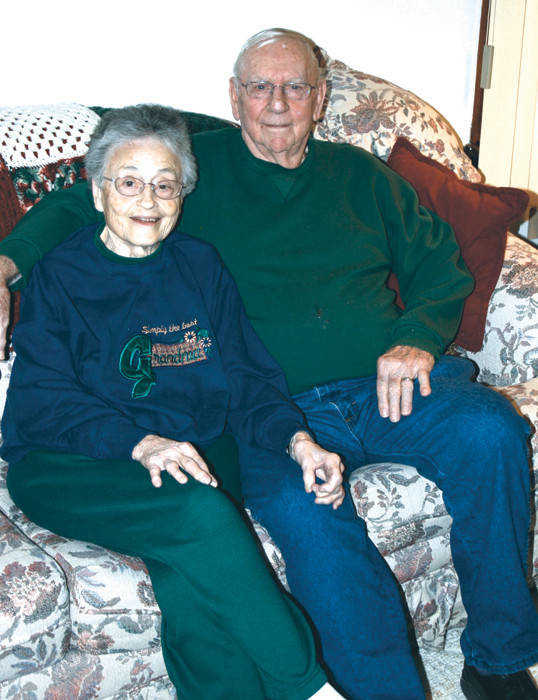 By Nick Schneider Bob and Frances (Susie) Yoho have lived most of their lives in Bloomfield, and they will celebrate their 63rd wedding anniversary in late June.

Robert "Bob" Yoho loves living in Bloomfield -- something he's done for nearly a half century on North Lewis Street.

He said life for the most part has been pretty good to him and his wife, Frances.

The couple will observe their 63rd wedding anniversary in late June.

"Bloomfield is a real good place to live. It has got a lot of good people in it," Yoho said. "Bloomfield, it's the best place in Greene County to live.

"All in all, Bloomfield is a good town. We've had a few ups and downs, but most of the times it's up instead of down, the way I see it."

Yoho said he's never had much of a desire to live in a big city and enjoys the urban, but rural setting of his home.

"I walk out my back door and I am almost the same as in the woods. I'm in town, but I'm out of town," he said in pointing out he's been blessed with great neighbors like David and Sue Johnson.

The 85-year-old Yoho is a native of Solsberry -- one of seven children who was raised on a farm when times were tough.

He graduated from Solsberry High School in 1942. Bob played basketball and remembers losing to Linton in the sectional his senior year.

After graduation, he went to work at the nearby Crane Naval base the same year -- like many of his buddies.

Crane was a good place for Bob to work, but duty to his country called and he marched off to war.

Yoho served in Europe for two years and was on the beach at Normady, France during the D-Day invasion.

The Normandy Landings were the first operations of the Allied invasion of Normandy. The assault was conducted in two phases: An air assault landing of American, British and Canadian airborne troops shortly after midnight, and an amphibious landing of Allied infantry and armored divisions on the coast of France commencing. The invasion required the transport of soldiers and materiel from the United Kingdom by troops carrying aircraft and ships, the assault landings, air support, naval interdiction of the English Channel and naval fire-support. The operation was the largest single-day amphibious invasion of all time, with over 130,000 troops landing on June 6 1944.

Yoho, who was a member of the amphibious engineering unit, calls himself "one of the lucky ones" who lived through that famous combat operation.

He was discharged from the Army in December 1945 and came back to work at Crane.

A night or two after his return to Greene County from the Army, Yoho started dating his future wife Frances Sharr -- whom he had known since his high school days.

"She was free and I was free," Bob remembers. "We went to school together. We had known each other all our lives. She was a yell leader for me when I was in school playing basketball. It was kind of a whirl-wind courtship. I got out of the service on Dec. 14, 1945 and we got married in June 1946. But it's lasted this long," he said with a laugh.

Bob affectionately calls his wife, Susie, and has since they started dating.

When asked why he calls her by a nickname, Yoho explained, "I just didn't like the name Frances. I mean, I thought that was more a man's name than a woman's. So I've called her Susie ever since."

Bob said he and Susie have gotten along well over the years and both acknowledged their love and friendship have carried them through both the good times and the bad.

When asked the key to their marital longevity, Yoho was quick to reply, "Give a little and take a lot. You've got to have a little common sense in with that. The couple has got to have about the same personalities and the same outlook on life. We've never been a couple that partied. The only party that we ever go too is connected with our church or the school. I mean no drinking, no smoking. We never did get involved with those things. In a marriage, you have just got to overlook some things and go ahead with life."

In 1949, Bob left Crane and was employed for about 11 months with a natural gas company in Ellettsville, before going to work for Johnson's Creamery in Bloomington.

While at the dairy for a decade, he moved to Bloomfield and has lived in the same house for the last 47 years.

Yoho returned to NSWC Crane in 1960 in the ordnance department. He worked his way up the ranks and was production supervisor for the last 10 years until his retirement in 1985.

Yoho served three terms (12 years) on the Bloomfield Town Council after his retirement from Crane.

He recalled that a good friend -- Walter Wilson -- was already on the council and asked Bob to run for the council seat.

He won the election.

Yoho said it's always a challenge to make ends meet for a small town like Bloomfield and its leaders have to be frugal in their decision-making process in order to keep taxes and sewer charges affordable.

"I had the motto to forget politics and do what you can do for the town of Bloomfield," Bob said.

Looking back, he said he is pleased with the job he did as a town council member.

With name of Yoho in Greene County, one would assume that Bob would be staunch in his Republican Party allegiance since his second cousin, Lavon Yoho served as party chairman for 37 years.

He added with a big smile, "We never discuss politics and basketball in our family."

These days, both Bob and Susie, have slowed down, though they both remain active in activities at Faith Christian Church.

Bob still likes to hang out at Ken's Barber and Style Shop when he gets a chance and discuss town business, sports or anything else that comes up. He spends much of his time caring for his wife, who has been afflicted in recent years with respiratory problems. He enjoys watching sports on television and occasionally get to attend a junior high game coached by his youngest son, Scott, who guides the Bloomfield seventh grade squad.

The couple raised two sons and has three grandchildren.

Their oldest son, the late Toby Yoho passed away June 1, 2001 at age 53 -- the victim of a quick spreading cancer.

Toby was a gifted athlete as well as a very successful teacher and girls basketball coach at Eastern Greene High School. He worked 29 years in the school district.

EG boys basketball coach Andy Igel asked Toby to help out during the 2000 season -- the last one before his death.

Shortly after his death, the school board in a fitting homage re-named the gymnasium in honor of Toby Yoho.

Mention of is passing still brings tears to Bob's eyes -- the obvious sign of the sincere love the two shared.

"Of course, we still miss him," Bob said as he paused with his voice cracking with emotion. "The last time I was with him at a ball game, he told me, "Dad I'm going to coach one more year and I'm going to retire to do the things that I missed out on. He was in the National Guard and retired after 24 years. Every summer, he had summer camp, He said now that I'm getting ready to retire, I'm going to do some traveling. He didn't make it."

Frances added, "He went so quick. Two weeks in the hospital and two weeks at home. It's the worst thing we've ever went through."

Bob added, "Burying one your kids is the worst thing anyone could ever do."

Athletics has always been a major part of Yoho's life in Bloomfield.

He never missed a Bloomfield boys basketball game for about 18 years and volunteered for years keeping the scoreboard/clock at varsity games.

Yoho helped the late Guy Glover and the late Bernie Hansford along with other volunteers organize the Bloomfield Little League program in the 1950s and he served as league president for 18 years.

"We had a really good deal and there was so many people that have been helped by what we did," Bob said.

Yoho has much admiration for Glover, who was an icon when he coached the Bloomfield Cardinals.

"Glover was one of the most influential guys that has ever been around Bloomfield as far as kids are concerned. He had a lot of influence not only on basketball boys but the whole school down there," Bob said. "I know my boys, both of them they played for Glover and when Toby went away to college, if he had a problem, they'd go to Mr Glover. Glover was a good, good man. I think he is really the one who put Bloomfield on the map. He was a good Christian man."