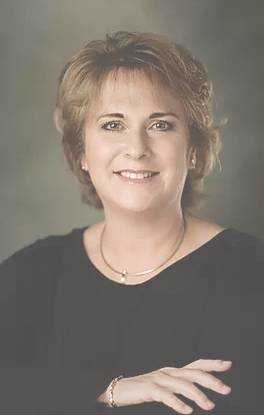 Editor's note: Due to the important health information contained in this story, we have decided to make it free for all to read.

Worthington native Leslie Ferris Yerger, a graduate of Purdue University, will appear to speak and sign copies of her book, “Probably Benign,” March 6 from 2 p.m. to 5 p.m. at the Worthington-Jefferson Public Library in Worthington.

Yerger, in a TED talk given on Oct. 17, 2019, asks, “If you could help a woman, any woman, maybe it’s you, your friend, your neighbor, your daughter, your mother, if you could help her find her breast cancer early, while it’s still curable, before it gets to a late stage when it’s not curable, would you do that? Of course you would, no one is going to say no to that, but how would you do it?”

Over the last two decades, she explains, we have made exceptionally few advances in preventing the deaths of the approximately 42,000 women every year who are diagnosed in the late stages of the disease.

Yerger herself was diagnosed with Stage IV lobular breast cancer in Nov. 2017, when abnormalities were found during a routine bone density scan. Her cancer was not visible on either a mammogram or an ultrasound, as would sometimes be the case with lobular cancer hiding in dense breast tissue.

“Where that leaves us is early detection,” Yerger continues. “That’s why the mammogram was invented, to find tumors early while they can still be treated. But the mammogram has its shortcomings, and that has everything to do with breast density. I hope that all of you know about this already, but for those of you who don’t, I will do a quick overview.”

Yerger goes on to explain the term to her audience, and shows the differences in breast density which can lead to undiagnosed tumors, and has also done so on the pages of her book, which gives the story of her journey from her diagnosis to her determination to educate women about supplemental breast cancer screening, so that her story does not become their story.

According to www.radiologyinfo.org, “Breast density is a proportional measure of the glandular, connective and fatty tissues within a woman’s breasts. It is most commonly determined using mammography, a diagnostic test that uses low dose x-rays. Having dense breasts is not an abnormal condition; in fact, about half of all women over 40 have dense breasts. Glandular tissue includes lobules (which produce milk during lactation) and ducts that carry milk from the lobules to the nipple during breastfeeding. Connective tissue (also called fibrous tissue), supports and holds glandular tissue in place. Fatty tissue helps give breasts their size and shape.”

Yerger says the failure of mammography and ultrasound in her case is not a failure of anyone, but a failure of our current technology. Regular mammograms, according to Medline Plus, will detect early stage tumors in 98 percent of women in the ‘a’ and ‘b’ categories. For women in the ‘c’ and ‘d’ categories with denser breasts, the percentage drops to about half.

For these women, other supplemental technologies, such as breast tomosynthesis (3D mammography), breast ultrasound and breast MRI are available, but are rarely offered routinely, and women who are unaware of their breast density may not know they should request them.

Yerger seeks to make a positive impact in advancing the next major breakthrough in breast cancer screening and making diagnostic tests for dense breasts more routine and, to that end, she underwent, in 2018, a 500-mile walk, the Camino Santiago from France to Santiago De Compostela, to raise funds for breast cancer research, and began her campaign known as “Walk The Way With Her.” 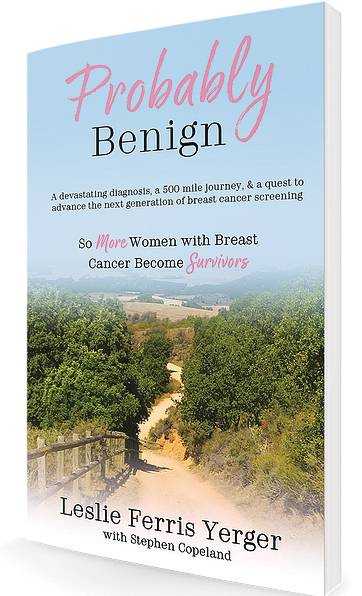 Yerger will sign copies of her book, “Probably Benign,” at the Worthington Library March 6.

According to www.walkthewaywithher.com, “Camino means ‘the way’, and the Camino de Santiago means ‘the way of St. James’. The Camino de Santiago is a network of trails leading from all over Europe to the Cathedral at Santiago de Compostela, where legend has it that the bones of St James, the apostle of Jesus, are kept. Historically, pilgrims from all over the world have traveled the caminos to reach the Cathedral. People walk the trails for personal, health and spiritual and religious reasons. In 2018, Leslie walked the Frances Way, which is the most heavily traveled camino. It starts in Saint-Jean-Pied-de-Port in France and ends at the Cathedral in Santiago de Compostela in Galicia, Spain.

The Frances Way is 500 miles from start to finish, traversing the Pyrenees, and winding through many towns and villages along the way. It took Yerger 40 days to complete the walk.

Yerger says, in her book, that her experience on the Frances Way helped her physically, mentally and spiritually.

“On the Camino, you realize very quickly what is most important to you on your journey,” she writes. “If you get too hung up on all the details, you’ll miss out on exploring why you’re on the Camino to begin with. For healing. For transformation. For growth. For progress.”

Yerger learned of a brand-new technology, called Molecular Breast Imaging, or MBI, a new screening technology that illuminates cancer in dense breasts that can not be seen by even a 3D mammogram.

According to walkthewaywithher.com, “Women have been told the 3D mammography is the new ‘gold standard’ for breast cancer detection, yet mammography finds less than half of all cancers in dense breast tissue, which pertains to approximately half of all women. MBI was designed to overcome this shortcoming in mammography, allowing many more cancers to be detected when the disease is still curable. MBI screening is slowly becoming more available to women across the country, yet very few know about it, even doctors.”

Yerger’s site reveals that MBI has proven to detect 3 to 4 times more breast cancers at an early stage than standard mammography in women with dense breast tissue.

Digging further into Yerger’s website, we learn that dense breast tissue alone is a high risk factor for breast cancer, which helps to explain why mammography screening is inadequate for half the female population.

Yerger’s Camino 2020 walk will see Walk The Way With Her collaborating with www.Survivingbreastcancer.org to raise funds which will support the Density Matters study, which will help to make MBI more available to women around the world.

Copies of “Probably Benign" will be available for purchase at the book-signing event, and a portion of the proceeds will be donated to the study.

Comments
View 5 comments
Note: The nature of the Internet makes it impractical for our staff to review every comment. Please note that those who post comments on this website may do so using a screen name, which may or may not reflect a website user's actual name. Readers should be careful not to assign comments to real people who may have names similar to screen names. Refrain from obscenity in your comments, and to keep discussions civil, don't say anything in a way your grandmother would be ashamed to read.
Respond to this story