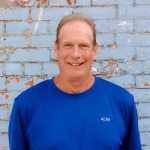 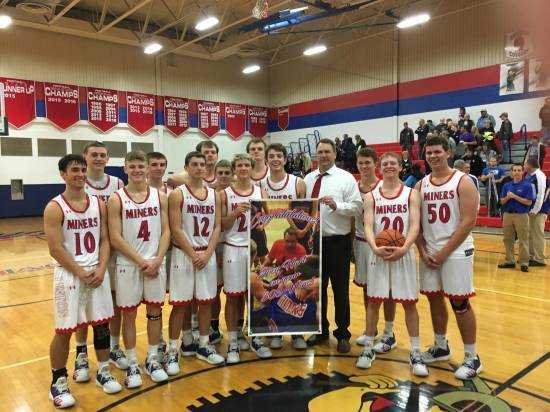 On November 30 Hart’s Miners defeated the Clay City Eels 93-46 presenting the coach with his 300th career win. Hart of course would have preferred win No. 300 to come last year. But a triple-overtime loss to South Knox in the opening round of the sectional put the commemorative event on hold temporarily.

If my Texas Instruments calculator is correct that computes to an average of 15 wins and nine losses per season. Rounded off of course. That includes one losing season in six years at Shakamak, three in six years at Turkey Run and his first year at the Linton helm, an 11-12 mark in the 2010-11 season.

A 15-9 record constitutes a good season at a lot of schools. I’d be willing to bet a lot of coaches, if you offered them a 15-9 record at the start of the season most would happily take it.

But it’s just an average season for Joey Hart.

Hart’s Miners went 12-10 in his second year. Since then Linton has reeled off seven consecutive seasons of 20 wins or more, beginning with the State Finals run in 2013.

I got to wondering, has any other coach in the history of Indiana high school basketball ever compiled seven straight 20-plus-win seasons?

So I got to researching.

John Harrell’s Indiana High School Basketball website indianahsbasketball.homestead.com has a link to the winningest current coaches. That’s where I started my search.

I’m going to stray off track momentarily. Harrell’s site is invaluable. John really should charge for his service. I would gladly pay a subscription fee.

Here is what I found.

I didn’t find any current coach with seven or more consecutive 20-plus-win seasons. Some have come close.

I found a few who had five in six years, six in seven years, seven in nine years, etc. But none with seven in a row.

Here are some of the notables I ran across:

Gene Miiller at Washington has had five consecutive 20-plus win seasons, from 2007-2011, including three 3A state titles with the Zeller brothers.

Dave McCollough at 2A Shenandoah with 549 career wins in 34 years currently sits at four straight. The Shenandoah Raiders are 22-1 this year and ranked second in the final AP poll.

Legendary Lapel coach Jimmie Howell, he of the 610 career wins in 37 seasons has never had more than two in a row.

Rob Yoder at 2A Westview has six in nine years, including four straight from 2011-14. Westview was 28-2 last year, losing to eventual 2A state champ Oak Hill in the semistate. The Westview Warriors are 22-5 this year and considered a 2A state title contender. Westview is No. 1 in 2A according to the Sagarin ratings, fifth among the pollsters. Yoder has a 279-120 record in his 16th year at the northern Indiana school.

Steve Lynch at Brownsburg has six 20-plus-win seasons in 10 years. Two of those were at Mt. Vernon (Fortville) in 2010 and 2013. The Bulldogs finished 17-7 this season losing to county rival Plainfield in the sectional. Brownsburg was 20-5 last year, bowing out to Terre Haute South in the sectional. Lynch is only in his 13th year of coaching so he may be a name to watch in the future.

Aaron Wolfe at NorthWood in northern Indiana had four straight 20-win seasons from 2014-17. But his Panthers are only 10-12 this year. Wolfe is in his 12th season.

Even the great Bill Green never did it – as far as I know.

Green coached Indianapolis Washington with George McGinnis and Steve Downing to an undefeated state championship in 1969 and later won five state titles at Marion (1975, ‘76, ‘85, ‘86 and ‘87). Marion and the Franklin “Wonder Five” from 1920-22 are the only teams to win three consecutive state titles. Green is the only coach to lead two undefeated state champions (Indianapolis Washington in ‘69, Marion in ‘85) – at least in the single-class era.

But I couldn't confirm he ever had seven straight 20-win seasons. Green left Marion after the 1976 state title only to return in the Eighties.

So there you have it.

As best I can determine no other coach in the history of Indiana high school basketball has led teams to seven consecutive seasons of 20 wins or more.

I wasn’t able to dig up much information on teams and records from the 1940’s, ‘50s, and ‘60s. So there may well have been someone from the “olden days” who could have matched Hart’s recent record of achievement.

Critics will be quick to point out it’s easier for teams to win 20 games now, simply because they play more games. And they are correct. I played in an era when high school teams were limited to 20 regular season games. To win 20 you pretty much had to go undefeated, or at a minimum win a sectional or a regional.

But as Ted Williams – the greatest hitter who ever lived – once said, “It’s easy to pick a man’s record apart. You could say, this hitter hit all his home runs in a bandbox, or this pitcher had great fielders behind him. But it doesn’t diminish what they accomplished.”

Other naysayers will chime in, “Well, Linton’s done it playing a 2A schedule and playing 1A SWIAC teams.” To that I say, while they aren’t wrong, Linton plays the best schedule it can assemble. Two of the Miners’ three losses this year have been to 4A teams Bedford North Lawrence and Terre Haute North.

I’m not here to proclaim Joey Hart as the greatest coach in the history of Indiana high school basketball. Joey himself would be the first to tell you seven straight 20-win seasons wouldn’t have been possible without the players he’s had. Every coach knows it takes talent on the floor to win.

But I have seen plenty of coaches do less with more…

One final word: If any historians out there can point out to me any other teams or coaches who have matched or exceeded 20 wins for seven seasons or more in a row I would appreciate your input.

I am far from infallible.