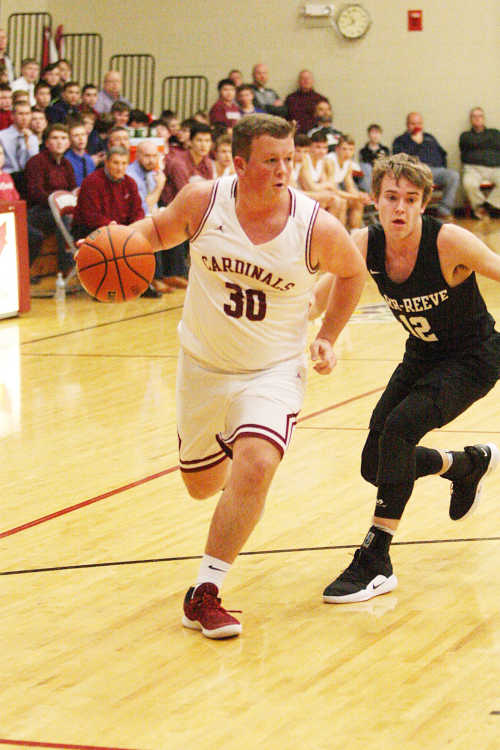 Graysen Medina (30) looks to pass after driving past Barr-Reeve’s Isaac Wagler when the teams last met Feb. 22. A recent game between Bloomfield and Barr-Reeve is featured in a new documentary Kings of Indiana.

A recent Bloomfield defeat will be immortalized on film.
Craig Lunceford of Monster Films recently contacted me to announce that the company has released a new documentary, Kings of Indiana. The film documents a recent basketball season of the Barr-Reeve Vikings, cxurrently ranked second in the final Class 1A Associated Press poll.
Lunceford said one of the featured games was a “fierce” battle between the Vikings and the Cardinals. He did not name the season, but Barr-Reeve has won its last three meetings with the Cardinals: 42-34 this year, 51-44 in 2017-18, and 48-46 in overtime two years ago.
“Kings of Indiana documents a recent basketball season of the Barr-Reeve Vikings, a team comprised of Amish/Mennonite players inside one of Indiana’s largest Amish settlements,” Lunceford said. “It does so with a personal look at Indiana basketball, its history and cultural meaning to the state, all while highlighting many local teams during the course of the season.”
Monster Films conducted a private screening of Kings of Indiana Wednesday, March 6, at Flix Brewhouse, a new theater in Indianapolis. Lunceford said the film had a limited theatrical release with AMC Theaters last weekend “and was greeted with absolutely overwhelming feedback.” My Google Fu skills revvealed that two of the showings were held in theaters in Vincennes and Terre Haute.
The initial rviews and inquiries proved positive enough for Monster Films to release the film in more theaters this weekend, March 15-16.
“If the support continues with the same enthusiasm after thay, a full state-wide release may follow,” Lunceford said.
Of course, Bloomfield and Barr-Reeve will meet again at 4 p.m. this Saturday in the Washington Semistate.

An Apology
I owe an apology to Markovic for misspelling his name all season.
I remind me of the Wizard of Oz classic “If I Only Had a Brain.”