All-Star game is only the beginning, only just a start 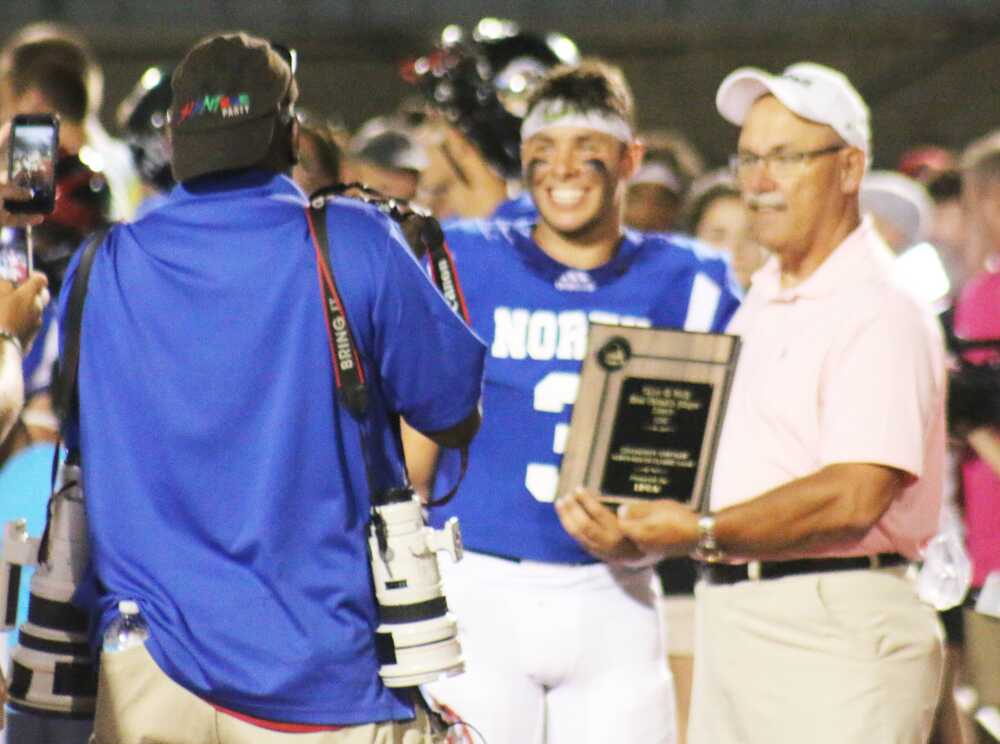 North quarterback Zack Merrill of Andrean was named Most Valuable Player for his work Friday, July 12, in the North-South All-Star game.

One journalist said it was the last football game of their high school careers.
However, I think one could say it was the first college game for many of the players, including former Eastern-Greene tackle Gage Baker. The caliber of play Friday, July 12, at the Indiana Football Coaches Association North-South All-Star game proved to be pretty high, as good as many a college game.
Zack Merrill (Andrean) won the Most Valuable Player award. On the first drive of the game, Merrill sprinted 23 yards for a first down and hurled a 35-yarder to Heisman Skeens (Mississinewa) to set up a 1-yard plunge by Christopher Harness (Mishawaka), the game’s first score. (Is there a better first name for a football player than Heisman?) He later ran 24 yards for a TD to pull North within two points, 24-22, in the fourth quarter.
I understand Merrill is going to try to make Indiana University’s team as a preferred walk-on this fall. His 6-foot-1 height mitigates against him in Division I football, but he is certainly talented.
South’s defense stepped up for the rest of the first half as Trevor Larence (Whiteland) returned an interception 73 yards for the team’s first TD. The defenders limited North to a field goat in the second quarter, a near interception and an 11-yard sack preventing North from trying a second field goal as the half expired.
Baker drew a good laugh from his coaches after the almost-pick by saying: “That was mine. You should have put me in there.”
He also drew compliments from his teammates and coaches for his defensive prowess in the third quarter. Baker got in on a couple of tackles as South took a 17-15 lead on a 28-yard field goal by Cade Browndyke (East Central) and a 24-yard scoring strike from Liam Thompson (North Central -- Indianapolis) to Logan Benson. On the sideline, Baker delivered plenty of compliments, hugs, and back-slaps himself as he sought to inspire his teammates to victory. Such leadership is a reason he won the Joe Goodman Award, given to players who exemplify leadership on and off the field. (The award is named for the late Seymour coach who helped organize and oversee the All-Star game.)
South took a two-score lead, 24-15, with 9:55 left in the game. Thompson threw his second touchdown pass, a 16-yarder to Jon Eineman (Mooresville).
However, Merrill galloped 24 yards with 6:05 on the clock to cut the lead to 24-22.
The South All-Stars began driving but Bronson Yoder (NorthWood) stepped in front of a pass by Christian Conkling (Pendleton Heights) and returned it to the South 33. Baker again took the field, but he and his teammates couldn’t stop North from driving to the South 11. Chris VanEekeren (Chesterton) booted a 29-yard field goal to account for the final margin. South continued to fight, but the horn sounded when they were trying to line up and spike the ball after a first down around the North 35.
“It was just a knife in the gut,” Baker said. “We were up by two scores. We kind of battled back, but sometimes things just don’t go your way.
“I don’t think we were outplayed,” he added. Sometimes things just don’t go your way.”

Other area players
Gage Baker wasn’t the only player from the area to participate in the North-South game.
I’m sure Linton-Stockton and Eastern fans remember North Central (Farmersburg) running back Dawson Basinger who carried several times for the South squad. He didn’t break off any big runs, but he got a few yards on every carry.
Jack Sherman of Terre Haute North snapped the ball a few times as center.
Defensive end Sam Lewis of Bloomington South joined Baker on the D-line.
Dalton Scott of South Putnam played inside linebacker.
One of the nice things about attending the North-South is seeing players from high schools I had never even heard of. However, they all played well.