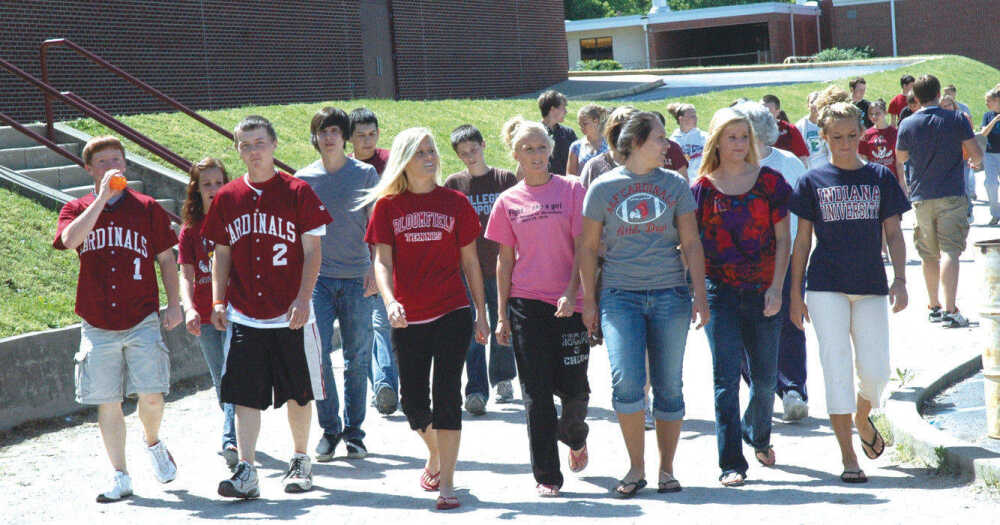 Submitted photo WALKING FOR A CURE: The Bloomfield School Relay for Life team and the senior Volunteers of America Action Team joined together to sponsor a School Walk Out on May 6 during fourth period. Money raised will go to the Greene County Relay for Life, which is scheduled for Saturday and Sunday at the White River Valley High School track. There were 235 Walk Out participants who donated $5 and other amounts, and a total of $1,200 was raised.

Teenagers often get a bad rap because they do things differently than adults.

Anything that's different than, say, 25 years ago some adults have a problem dealing with.

Teens often get tossed into the category as being trouble-makers or unruly.

Then they go and do something like a group of Bloomfield High School students did last week and it proves they're good inside. They may act, look or do things a little different than mom and dad and grandma and grandpa, but deep down they're really no different.

The Bloomfield School Relay for Life team and the senior Volunteers of America Action Team joined together to sponsor a School Walk Out on May 6 during fourth period. Money raised will go to the Greene County Relay for Life, which is scheduled for Saturday and Sunday at the White River Valley High School track.

"Participants paid $5 and were allowed to leave their fourth-period class to go to the track and walk," sponsor Nancy Hudson explained.

"The event began and ended with a lap of silence as the group walked silently, contemplating those in our lives who have battled cancer, and for those who are facing the battle now."

This is the first year that Bloomfield has conducted a Walk Out fundraiser.

"Nancy DeGott came up with the idea. Her dad, Albert, is currently in Houston at the Anderson Cancer Center and Nancy is devoted to helping bring hope and help to those with cancer," Hudson said. "She is really the story here ... a wonderful girl, always smiling, always upbeat.

"She has worked for the Bloomfield School Relay for Life Team for five years, though we have never done the Walk Out before."

There were 235 Walk Out participants who donated $5 and other amounts, and a total of $1,200 was raised.

Hudson is proud of how the students stepped up to help those in need.

"It says that our Bloomfield students, as I believe our students in Greene County, really do care about each other, know each other, and support one another," Hudson said. "So many of us have been touched by cancer in our lives, or our families lives, that working to raise money for a cure, or to bring hope and help when needed, is so uplifting."

Bloomfield has been active in the Relay for Life for at least five years.

"The Relay for Life team has been active here at school for around five years. The senior Action Team is a volunteer group in association with the Major League Baseball Players Association, through the Classroom edition of The Wall Street Journal," Hudson said.

"It was not hard at all to get a team. We have completed one project a month, and I believe our capstone project in May, the Walk Out, was a great success, and a great way to end the school year."

Some of the top students at Bloomfield are members of the Action Team.

"The senior Action Team has three national scholarship winners -- Nancy DeGott, Alison Kreszniak, and Rachel Toon. Each girl had to submit an application with an essay about volunteer work, and they were chosen along with 24 other students, from Hawaii to New York," Hudson explained.

"Each girl received a $1,500 scholarship, and Rachel was featured in a national conference call last week with (announcer) George Grande from the Cincinnati Reds, and two major league baseball players as a scholarship winner. It was very exciting to listen and watch her on the computer as she spoke to people all over the country."

A huge pat on the back to all the Bloomfield students who took part in the Walk Out, and to those who will walk in the Relay for Life this weekend.