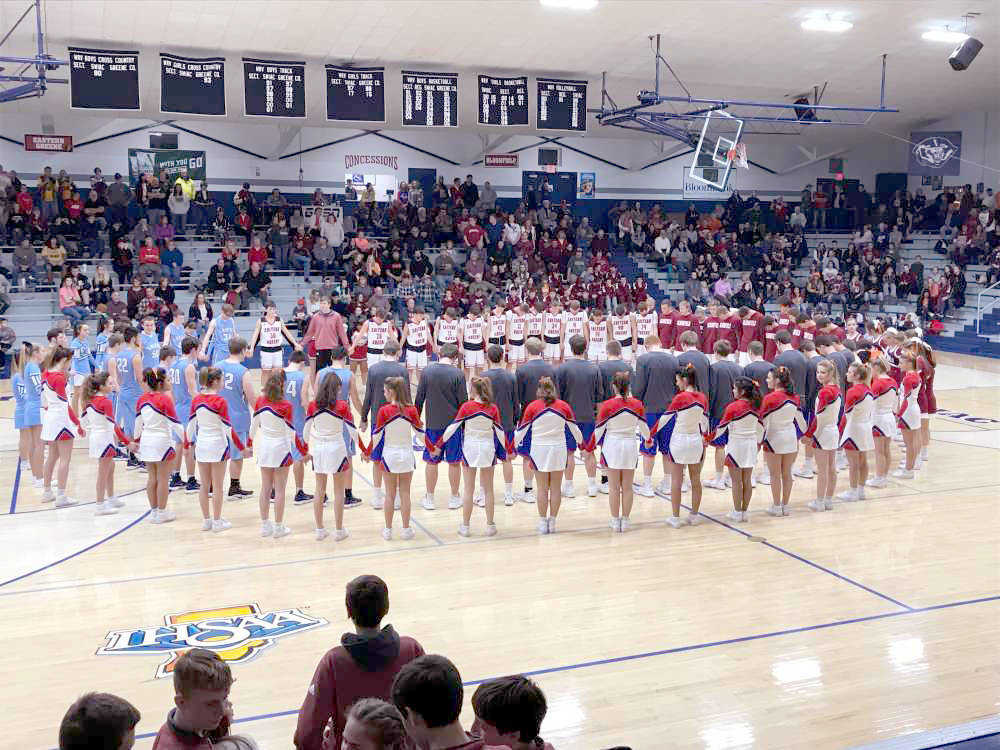 Every now and then something happens to remind me why I’m proud to call Greene County home.

It’s not something I go looking for or is planned. It’s something that just pops up and makes me appreciate our area.

It happened again Saturday night between games at the Greene County Invitational at White River Valley High School. Eastern Greene had just defeated Shakamak to capture third place, and Bloomfield and Linton were moments away from warming up for the championship game.

If you know anything about the Bloomfield-Linton rivalry, you can bet the players, cheerleaders, coaches, and fans were preparing for another neighborhood brawl. It’s always exciting when those two schools get together.

They all held hands in a circle and said a prayer. Wow, what a powerful scene.

The prayer was for Linton sophomore Madi Moore, who was recently diagnosed with Acute Myeloid Leukemia. According to the Leukemia and Lymphoma Society, AML is a cancer of the bone marrow and the blood.

Instead of cheering on her Miners on Saturday night at WRV, Moore was in Riley Children’s Hospital in Indianapolis where she is receiving treatments.

“I am proud of those kids who put this together and executed it,” White River Valley superintendent Bob Hacker said. “I didn’t learn about it until just before it happened.”

Fans also had the opportunity to help. Cheerleaders from all the teams walked through the gym collecting donations for Moore and her family.

Hacker was impressed with what he witnessed.

“I think it says that our communities can keep the emphasis on what’s really important. We all like to compete and win, but at the end of the day it’s really all about being there for each other, all the time, surely, but it’s even more important during times of crisis,” Hacker explained.

“I can’t even fathom what that individual and her family are going through ... most of us haven’t had that experience. But we can certainly offer up our prayers and best wishes and support. Again, tip of the cap to those kids.”

The news of the prayer circle went viral once it was posted on the newspaper’s website, Facebook page and Twitter account. As of Tuesday afternoon, the post on our Facebook page had reached almost 7,500 people. The newspaper’s website had almost 5,500 unique visitors on Sunday, which is normally a slow day. The number of people it will reach through our website and newspaper will eventually reach 10,000 or more.

My personal Twitter account saw more retweets and likes Saturday night and Sunday than from any other post I’ve made. People I have no idea who they are retweeted the post. Luke Zeller, former Indiana Mr. Basketball from Washington, was one of them.

A GoFundMe page has been established to help Madi and her family. You can donate by going to

You can also show support for Madi and her family by purchasing a yard sign for $10. Contact Jennifer Hudson at (812) 798-4667 for more information.

I’ve not been able to track down who is responsible for the prayer circle. I keep getting “the students” as an answer. That’s OK, because it really doesn’t matter.

It’s great to know our students as a group came together for a good cause. They showed the importance of the power of prayer and thinking of others.

Today’s teenagers are oftentimes criticized for being self-centered, glued to their cell phones, and not worried about much of anything. What I witnessed Saturday night proves otherwise.

It also makes me proud to call Greene County home.

Chris is the publisher of the Greene County Daily World. He can be reached by email at cpruett79@gmail.com or by telephone at (812) 847-4487.