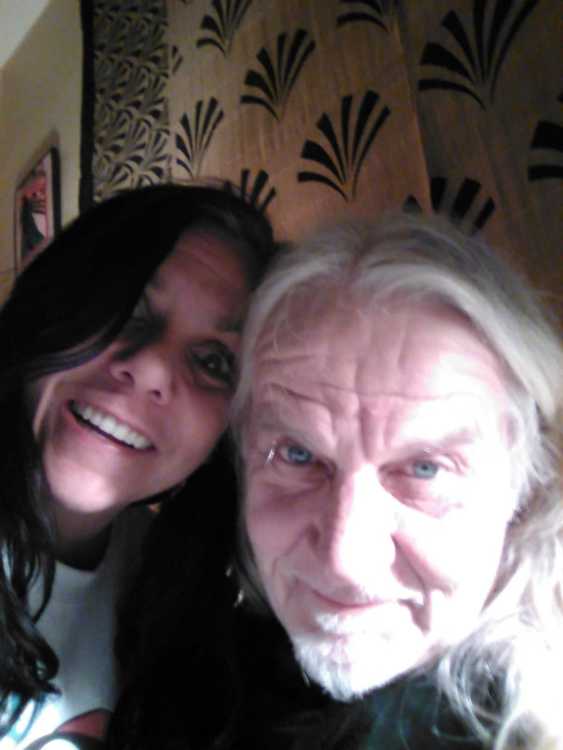 My husband John recently had a birthday. His 65th, in fact. We generally check in with one another, about a week or so before either of our birthdays, to see if anything in particular is wanted or needed.

I usually make a bulleted list for him, detailing the proper colors and sizes and/or brands or types. With John, however, it's always the same: (I'm paraphrasing here)"I don't want anything and don't make a big deal out of it."

Where's the fun in that? Everyone wants something, even something simple like socks or underwear. This is why he gets socks and underwear every year.

We like to top each other in weird-gift-giving, seeing who can find the strangest thing for the other.

One year for my birthday, I unwrapped a used pair of size 16 Air Jordan sneakers. John had found them at the recycling center, and apparently they screamed "WEIRD GIFT FOR PATTI", or something.

I looked up at John, and he said "Aren't they awesome?," knowing that I would get the joke. I vaguely recall sighing and thinking that they were, in fact, awesome.

Over the years, I have gotten plastic dinosaurs, funny refrigerator magnets, silly shirts and one memorable year, rubber nipples.

Yep, rubber nipples. A favorite Ren and Stimpy episode of ours is titled "Rubber Nipple Salesman," and my darling husband correctly guessed that I would find the gift hilarious.

So hilarious, in fact, that he unwrapped the same package of rubber nipples the following year, from me.

I remember fondly the first year we were together, and I schemed with a group of our friends to plan a surprise party for John. We didn't have a working oven, so I snuck over to a friend's house for two nights in a row to bake his birthday cake, which I shaped into two bright mushrooms and frosted with red and brown frosting.

We quarreled later (the first of our rare quarrels), because he objected to his new wife taking off for two consecutive evenings for parts unknown. I, of course, could not reveal those parts without blowing the surprise, and so I wore a secret grin, quarrel or not.

The big day finally arrived, and a couple of friends called John up and invited him out for a birthday beer. He was a little suspicious, but hey, free beer, so off he went.

No sooner had they left than I was on the phone calling the conspirators I had planned with for weeks. They arrived with balloons, gifts, decorations and the aforementioned mushroom cake. Within 30 minutes the house was transformed into party central, and the birthday boy was due back any minute. My fellow party planners had all parked away from our place so John would be none the wiser.

They arrived back from birthday-beer-a-thon right on time, and we all hid behind furniture and tried not to giggle.

There are 25 steps from our entrance up to our home, so there was plenty of time to anticipate the surprise.

Erek Wilson had the prime spot, concealed right at the top of the stairs. He also had a can of compressed air, the horn designed to inspire heart attacks in surprised humans. As John reached the top of the stairs, Wilson gave me a wicked smile and raised the can of air.

I will never, never, ever forget the look of WTF on John's face when he hit that top stair, and Wilson let go with the loudest air-horn blast imaginable, right into my beloveds left ear.

John's feet left and then returned to the floor in about one fourth of one second, creating a stomp nearly as loud as the compressed air had, and the look of terror/confusion/joy/"i-wet-my-pants" on John's face was one I shall remember with joy forever.

We had a lovely night, with lovely friends and good food.

The day of his birthday this year, he naturally wanted nothing in the way of gifts, but he did note how many people had "Facebook-wished" him a happy birthday, and I could tell he thought waking up to 117 people wishing him a happy day had, in fact, given him just that.

As I returned from work that evening with delicious ice-cream cake, I couldnt' wait to share the fact that I had just signed out of Facebook upon leaving work, and couldn't help but notice that his birthday wishes had climbed to over 200, counting the ones sent through my post on my page.

This made him smile, and his smile makes me smile.

I let him know that we would "do the gift thing" a day late, because he married a woman not smart enough to order on time.

I just finished wrapping his gifts, and I hope he likes them.

If he doesnt, maybe I'll get them back, wrapped for my birthday in October.