Another reason to be grateful for the life I lead 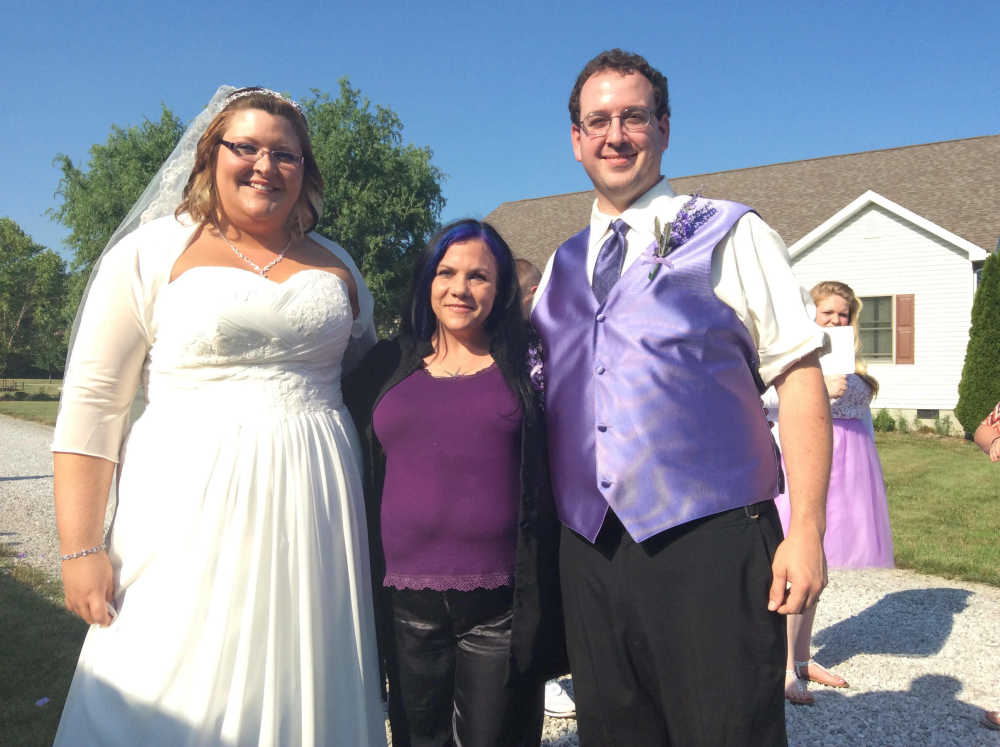 Some people just don't like weddings; Too formal, too boring, not enough people there that they know, they don't like to dance, whatever.

Other people like them well enough; Free food, a chance to dress up, cake is delicious, whatever.

Me, I loooooooooooooooooooove weddings, always have. People on their best behavior (at least until the liquor flows and the Prince playlist begins), looking fine and socializing like little butterflies, weddings are happy celebrations among people you love. What's not to like?

But that's not why I looooooooooove them. I love them because I conduct them. I am an ordained minister with the Universal Life Church as well as American Marriage Ministries. I have been so since about 2006, and I make no claims as a pastor, shepard, priestess, or even a leader. I have the deepest respect and admiration for those men and women worldwide who have devoted their lives to the ministry, in whatever religion they represent.

Here in Linton, we have a multitude of Christian ministers and pastors, good and compassionate people who give so much of themselves, and not just on Sundays.

I am humbled in their presence, and if they were lions, I would be a duck-billed platypus in comparison.

Rather than hypocritically make any claims to having a pious nature, I do honestly strive to maintain a humble and loving heart. For what I do, that is vital, because I meet with couples who have decided to change their lives forever.

Their wedding day and their ceremony are sacred things, along with the vows and promises they swear to in front of other people that day.

I consider every request to perform a wedding (or a funeral, or a baby-naming) a sincere compliment. People are choosing to trust something very sacred and important to me, and I take that as an honor and a duty.

Sometimes my weddings will have a bit of humor in them, purposely or accidentally, but I treat each and every one with love and respect, honor and devotion.

I have done Halloween weddings where everyone is in full costume, a tie-dyed hippie wedding in a park in Vincennes on a rainy day, a quick ceremony at the bedside of a dying mother whose last wish was to see her son wed, and more than a few have occurred right in my living room. I have always considered this "fee system:" My fee is whatever a couple can comfortably afford. Generally, that's anywhere between $50-$150, but I've performed them for repairs on my car, the loose change and a couple of bills from the bottom of a purse, and more than a few for way more than I thought I deserved. But I do pour my heart into ceremonies, and whether we meet once or seven times prior to a ceremony, the couple I am working for have all of the spiritual energy I contain at their disposal when they say "I do."

Want to know how it all began? If not, go ahead and turn to the sports pages or sudoku, I won't be offended.

But here's the story: Way back in 2008, I think it was, when a couple of our close friends asked my husband if he would lead a ceremony for them. They had been officially wed at the courthouse days prior, but wanted a ceremony to invite friends to, and to have a celebration. It was to take place on the Fourth of July, and my musician-husband had been booked to play a show with his band, The Roosters.

Sooooooooo, they asked me. I was flabbergasted, flattered and frightened to death at the prospect. We met a few times prior, getting ceremony ideas from the library and the internet and deciding who should stand where and details like that.

Finally, we had a ceremony everyone was happy with, and the big day arrived. Was I nervous, terrified, anxious and pretty sure I was going to look like a bumbling idiot?

In a word, YES. But I did it, and it was one of the most gratifying and rewarding things I'd ever done. It's hard to convey the emotion and the feeling of being called to service that I felt, but suffice it to say that I immediately began to research the steps I needed to take in order to be able to officially unite couples in marriage.

I've performed more than 50 weddings, one magical and precious baby-naming and two funerals for people very dear to me. Obviously, the funerals were not joyous and celebratory like the others, but they were equally, if not more, sacred and important to me.

In closing (this installment anyway), I am grateful to have whatever character trait it takes to be that person who leads others in ceremony, and I thank each and every person who has invested their trust in me to perform them.

Special thanks to Timberly and Kade, Jazz and Ramsey, for opening the door through which I discovered this part of myself. Namaste, dear friends.

Patti is a staff writer for the Greene County Daily World. She can be reached at pattippdanner@gmail.com or at 812-847-4487.