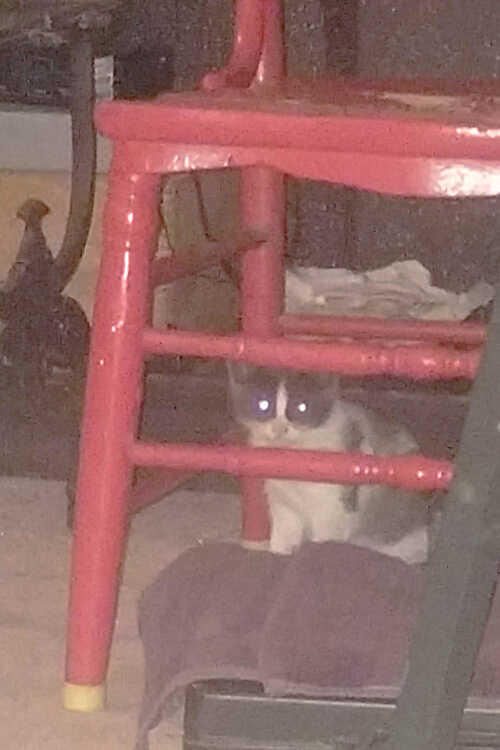 Markie spent her first few days at the Danner’s hiding behind things, ever watchful and afraid.

Last week, I shared the story of the beginning of the Danner family’s adventures in Kittyland, the multi-part tale of our experiences while fostering the kittens he had rescued from a feral mother at the recycling center. When I left off, John and I had opened our home, or at least the back room we call the music room, to two fuzzy little sisters I dubbed Monkey and Monster. They came to us at about three weeks old, little dirty ragamuffins who needed love.

Well, they came to the right place, the little stinkers.

Monkey and Monster awakened in us a sense of purpose and responsibility for creatures totally dependent on human intervention to survive.

They also made us say things we never anticipated saying to each other, like “Monkey did two poops last night, isn’t that awesome?” and “These nipples are amazing!”

After a few weeks of round-the-clock bottle feeding, baths in the kitchen sink and manual potty efforts, the two sisters and us had developed a routine. John, the earlier riser, would feed them a bottle every morning before he left for work, I would check on them and feed them before I left for work, John would resume duties when he got home and I took over for the night shift, more than once falling asleep on the floor of the music room, sometimes mid-cuddle.

We bought them toys, gave them our favorite blankets and collected boxes for them to play in, constructing a cardboard playground they delighted in.

The mama cat at the recycling center still had two kittens with her and John tried every day to catch them, being thwarted by the mean mama and her ever-skittish kits more often than not.

Then one day, success!

John was able to catch one of the two kittens, another gray and white girl. She was later dubbed “Markie,” for Marky Ramone, drummer for the Ramones and last surviving member of the band. Also, the trend of giving them names beginning with “M” had become our thing, so we stuck with tradition.

Markie spent her first few days hiding, she had learned that trick well from mama cat. One evening as I was on kitten patrol, she snuck out from behind the record racks and found a safe spot under a chair where she stayed the whole night. I spoke to her in the most soothing tones I could muster and she looked at me with fear and disdain. For hours.

She moved from her hidey-hole once or twice, sneaking around the perimeter of the room with one eye on me at all times. She watched her sisters play and you could tell she wanted so badly to join them. It was sweet and sad at the same time.

I duly reported her bravery to John the next day, and we both became more determined to tame this sweet feral baby.

John spent long hours every evening in the music room, playing records and talking to the furbabies, and he was the first to get Markie to come near him. He told me he had laid down on the floor to stretch and was soon covered with boisterous kittens. I was jealous and coveted the blanket of kittens for myself.

That evening, I got to see a little more, but not much more, of Markie. She finally caved in and came within a few feet of me when I brought in the full dishes of wet kitten food, savory-smelling and too tempting to resist.

At this point, the kittens were about five or six weeks old and bottle feeding was history.

She still took a very long time to warm up to me, so I made it my mission to try to prove to her that I was actually awesome. She already thought John was awesome, and most people do so I guess I shouldn’t have been very surprised by that.

So, now we had three little nagging balls of fluff with claws to occupy our time and our back room, and it was even more fun than having two.