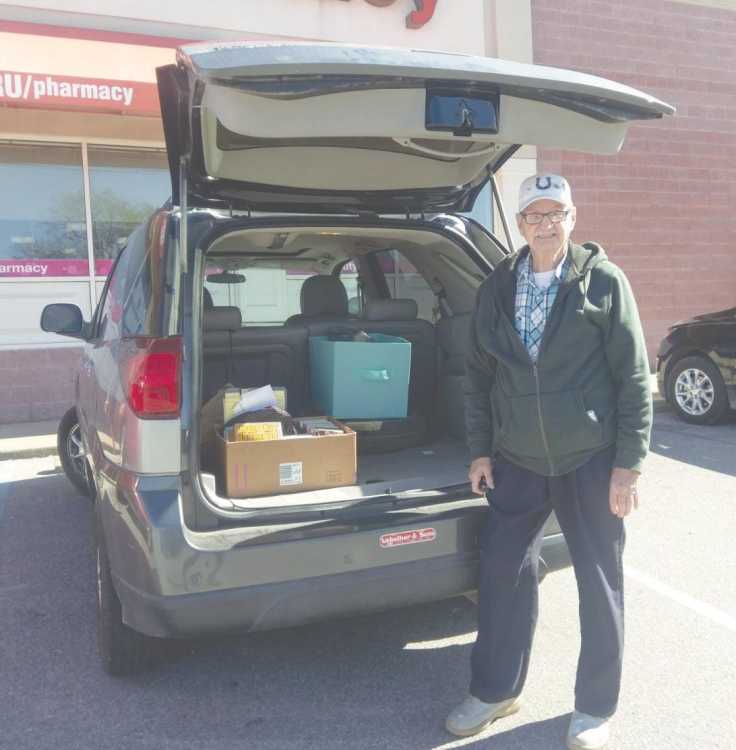 I first met Bob at a meeting of the Bloomfield Chamber of Commerce, which he attended with the Library Director, Austin Stroud. Stroud introduced Bob and explained Bob’s main function at the library, working as an Outreach Coordinator. Bob delivered books, DVD’s and other materials to homebound library patrons, often staying to chat awhile when he did.

I contacted Austin, and he set me up to interview Bob in July 2017. Bob, being the wise person he was, decided our interview would be best conducted “on the road,” so I rode along with him on one of his delivery days, stopping at several “Little Library” locations around the county, where Bob would carefully note the number of visitors to each one and restock the book supply.

We meandered through Eastern Greene County, stopping at his favorite Little Library at the Tulip Trestle and bringing books to one of his favorite clients, staying to visit for over an hour.

I learned so much about the services Bob performed, and that story came out July 24.

But I also learned so about Bob, and wrote his story, which was published July 28.

Bob was so unique, so full of love, so humble and so happy to do his work, helping people.

He also worked with the Greene County Literacy Coalition, visiting Head Start locations and reading to children. Bob loved to use different voices for the characters in the books, and was often recognized by kids while he was at the grocery store. Their excitement at seeing him would really make his day, and he told me there was no better feeling than hearing a child shout, “Mom, that’s my Bob!”

Bob had one daughter, Robin, and she is the sweetest woman you could imagine. She gave me some childhood memories as I wrote his story, and I could picture what it must have been like growing up with Bob as her dad.

Neill’s memories of growing up with Turner as a role model brought a smile to her face as she remembered.

“My dad was a dry waller, and he had this little mixer bucket that kind of looked like the big mixer on cement trucks,” she said. “There was a phase that I went through where I loved to make mud pies, mud forts and such. One day, I decided to mix my mud in his mixer. When I got caught, I was sent to my room ‘until your father gets home.’ I sweated and worried the rest of the day. When he got home, dad laughed and made mud pies with me, then we cleaned out his mixer together. My dad showed me patience, he showed me compassion, and he taught me not to sweat the small stuff. He also taught me that it’s mostly small stuff.”

“My favorite thing about my dad is his sense of humor, most of the time,” Neill said. “Once you meet him, he is memorable, to say the least. Getting to know my dad has taught me a lot about myself, where I got my work ethic, my strength and independence. I admire his tenacity, I’ve watched him battle life over and over, to overcome and rebuild. I have watched my dad mature,” she said.

Neill also recalls watching her father display a remarkable determination when dealing with his own health issues.

In recent years, Turner found himself faced with a diagnosis no one wants to hear. While not forthcoming with specifics, Turner revealed he was diagnosed with cancer a few years ago.

Turner’s particular cancer was one with a high likelihood of metastasis. In metastasis, according to the National Cancer Institute, cancer cells break away from where they first formed (primary cancer), travel through the blood or lymph system and form new tumors in other parts of the body.

“I have watched my dad deal with several medical conditions at one time,” said Neill. “He went through chemotherapy and still worked full time at age 82, while keeping his sense of humor even though he didn’t feel well. He was patient with medical staff and kept them entertained, even though I know he was hurting and scared.”

Evans echoed the feelings of Turner’s daughter. “Bob just kept on going and going,” she said. “He made jokes about filling up his ‘man purse,’ with healthy snacks and juices he juiced himself after researching the benefits of them. He has such a strong faith in God, and that faith manifested itself in results.”

Said Neill, “He kept his focus on God and knew whatever happened, he was ready. He has been in remission for almost two years now.”

Remission from a highly-metastatic cancer is a beautiful, wonderful thing...while it lasts.

Bob and I kept in touch, occasionally meeting up, like when another Little Library was installed at Autumn Trace in Linton in October 2017 and another was installed at Independence Place, Bob’s home, in August 2018.

In July 2018, I was contacted by Austin Stroud, who told me Bob’s car had stopped running, and he was having a heck of a time trying to find the money to get another one.

In fact, Stroud said, Bob was going nuts not being able to work. He worried about “his people” and how they were getting by without the book deliveries and visits from Bob they were accustomed to.

I’m guessing Bob was getting pretty lonely as well...anyway, Stroud wanted to know if I could help by publicizing Bob’s problem and seeing if people would be willing to donate to a fund he had set up for Bob with GoFundMe.

So July 20, 2018, Bob became the subject of my column, as I plead for readers to assist if they could.

Here is a paragraph from that column:

“Most of what Bob does for the library is voluntary. He loves people, has a strong faith in God and says that faith is what put his cancer in remission. Faith could not, however, put his medical bills in remission, and so Bob lives on very little and has no money to buy a car.”

The response was so beautiful, I will never forget it. One reader even made a special trip to the Bloomfield Library to drop off a $100 bill!

Enough was raised for Bob to purchase a used vehicle with plenty of room for the accoutrements of Bob’s trade, books, books and more books.

I saw him randomly at CVS in Linton and he was so excited to show me his “new” car, and he was so happy to be back doing what he loved to do.

A few months ago, I was contacted by Austin Stroud again.

So Bob had to quit work, and his daughter said he was restless but ready to meet his God.

Just last week, my friend Heidi, who works with Robin Neill, asked if I would put something in the paper to announce a belated birthday card shower for Bob, who turned 87 on Oct. 26.

I still bought Bob a card, though, and I intend to send it to him by angel mail. You know, like when you have a bonfire and toss a personal message to a deceased loved one into the flames, where the angels see and carry the message up to Heaven for you? To me, that’s angel mail.

So, do me a favor if you attend a bonfire this fall or winter. Send Bob some birthday wishes, a little note of thanks for all he did for Greene County or your favorite joke.

From the bottom of my heart, Bob, thank you.